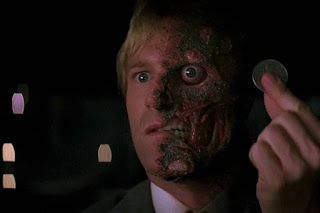 Two-Face
Armor Class: 7 [12]
Hit Dice: 2+1
Attacks: Pistol (1d6)
Move: 12
Harvey Dent, once a U.S. Marshal, is wanted for multiple charges of murder. While Dent was a U.S. Marshal a couple of outlaws got the jump on him. They nearly beat him to death. While beating him they held his face down on a hot anvil which completely burned off the flesh of the left side of his face. They left him for dead but Dent miraculously survived the ordeal. The attack drove him mad. He wasted away days and weeks hunting down the outlaws. He eventually found them but left their lives in the hands of chance; a coin toss. Heads - dead, Tails - live. Fortunately, chance was in Dent's favor. The wound on his face began to rot and poison his mind. He became another person while Harvey held on to humanity. Two-Face Harvey. Kind, generous, hero. Then cruel, greedy, villain. Which side Two-Face was was left to chance.
There is a 1-3 chance in a 1d6 (roll of 1, 2 or 3) that Harvey, tossing tails, will not harm or try to harm the PC. There is a 1-3 chance in a 1d6 (roll of 4, 5, or 6) that Two-Face, tossing heads, will attack the PC with a +1 bonus to damage and to-hit.
at October 28, 2018