Offworlders by Chris. P Wolf with Illustrations and Layout by Olivia Gulin. It is an RPG that is built upon John Harper's World of Dungeons (a personal favorite). 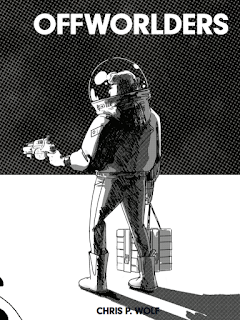 "Offworlders is a science fiction roleplaying game about adventurers, outlaws and guns for hire making their fortune on the rough end of the galaxy. It is designed to be straightforward enough to pick up and be ready to play in just a few minutes as a one-off game, but with enough meat to play a short campaign as well."

If you're familiar with Dungeon World and other Powered by the Apocalypse games then Offworlders is a great addition. Offworlders builds upon the three-page World of Dungeons. It takes the basic mechanics of WoD such as attributes, skills and special abilities and expands upon it much like other PbtA games. It even has the same Class structure as WoD including the simple make your own class rules. The Character Advancement is much like DW. Receiving XP for rolls of 6- and end of session questions.

It has rules on creating the ship the characters are on. The rules are very much like the Character Creation rules. The ship starts with basic stats and modifications and at creation the players, collectively, select two modifications for their ship. Such as, Shuttle Hangar: Comes with a small shuttle which can fly independently, but cannot travel between stars on its own. Ship combat works with the characters taking roles on the ship much like the bridge on Star Trek series. The players make the rolls for the roles they have taken on the ship as if it was combat against character and NPC. There are also Traveling rules and Maintenance rules for your ship.

There are four different classes in Offworlder. Warrior, Outlaw, Geek and Psychic.  Each class has five abilities that are unique to them. Examples are - Brute: You deal +2 damage with melee weapons; Jump: Once per scene, you may teleport instantly to a nearby location that you can see. There is also an optional rule of Customizing Class that allows the players to select any two abilities from any of the classes. I prefer this option because it allows the players to get more creative and more precise with their character concept.

Dr. Ekard
Mutated enhanced four-armed human
Abilities: Heavy Lifting, Chemist
Skills: Athletics, Science
Strength +2
Agility 0
Intelligence +1
Willpower -1
Health 14
Gear 3
Credits 10
Equipment: Energy Ring (Light, melee/range)
The energy ring is a device that Dr. Ekard created that allows him to manipulate kinetic energy into a force he can fire out of his ring either as a ranged blast or a forceful melee attack.

The GM section of the book has a lot of the same rules/concept found in most PbtA games. It also has The Die of Fate rule that is found in WoD. There are rules on creating Jobs. Jobs are essentially Fronts found in DW but a lot more clearer on how it works. One of my favorite things found in the GM section are the tiny paragraphs on NPCs and Non-Player Starships. A lot of minimalist PbtA games don't have a simple skeleton on what the NPCs should look like in terms of game stats. I'm glad that this is here because it helps with on the fly play. The last part in the GM section is on creating star maps, factions and tables. There are five different tables each with thirty-six possible results. The tables: World Types, Themes, Objects In Space, Cargo and Names. These tables are great for on the fly play.

4 out of 5 stars. There are some typos here and there but nothing serious. Though, the Character Sheet and Ship Sheet in the back of the book I'm not a fan of. It is typed out on a dotted graph paper and I feel that all of those dots are just a distraction to the eyes. And if you start writing on it I'm sure it would be rather difficult to see what is written given that it is already difficult reading what is already typed. If you are looking for a Sci-Fi game that is PbtA then this is it. It doesn't bog you down with rules and it leaves a lot open for the GM to add on or remove from the system. Honestly, Offworlders is probably going to become my go to Sci-Fi game. Lastly, as I posted this review Offworlders is free. So go get it! Also, I hope there is a softcover coming out because I need it.
at November 06, 2018 2 comments: