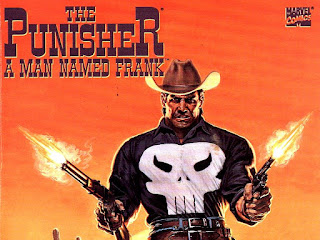 Frank Castle
Armor Class: 4 [15]
Hit Dice: 5
Attacks: Weapon
Move: 15
After the war Frank returned home to his family. His wife was more beautiful than he remembered and his son grew a foot taller. Frank and his family moved out west to get away from his past that was haunting him. After the move life was back to normal and it was great. Until one day Frank came back from the market to find that his pregnant wife and son were hanging from the apple tree beside their house. On the tree where his family hung there was a carving of a jigsaw puzzle piece...
During the war Frank was given a nickname by his fellow soldiers; The Punisher. He was given the name for his ruthless tactics and the fact that he never showed mercy. Frank Castle can use any and all weapons with a +1 bonus to-hit for all weapons. Frank also has a 1-4 chance in a 1d6 of success when tracking foes, hearing noises, climbing walls/cliff without tools, hide in shadows and move silently. When using melee weapons Frank has a +1 bonus to damage and his unarmed attacks deal 1d6+1 damage (bonus damage included).
at October 28, 2018