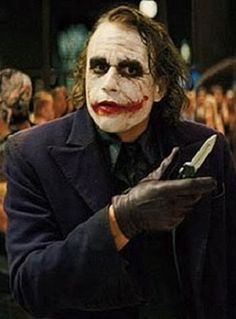 Joker
Armor Class: 8 [12]
Hit Dice: 3
Attacks: Knives (1d6-1)
Move: 12
A drifter wanted for multiple accounts of murder in multiple towns. His motives are unknown but each of his victims are left with their mouths sliced open in the shape of a smile. There have been some survivors that claim their attacker's face was painted like a clown and that he wouldn't stop laughing as he brutally killed the others. The papers have given this murderer the name, Joker.
Joker carries many, many knives on his body and rarely uses a gun. Though, he is a fan of dynamite for the flare.
at October 26, 2018