Six Shooters & Wagons by Justin Isaac of Halls of the Nephilim is a Swords & Wizardry Continual Light Hack.
Six-Shooters & Wagons ''lets you move away from dungeons and into the saloons and wagon trails of the old west.'' The game follows the same formula/structure as SWCL. 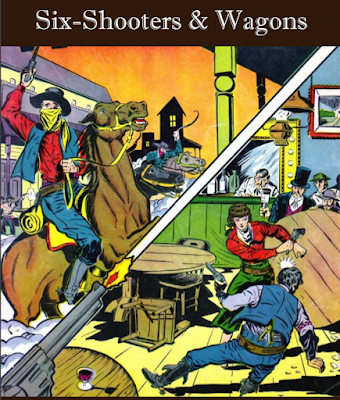 There are four key classes: Gunslinger, Scout, Soldier and Swindler.
There are also four optional classes: Deadeye, Moonshiner, Scrapper and Vigilante.
If you're not aware of how optional classes work in SWCL they are basically modified versions of one of the key classes. The drawback for selecting an optional class is that it takes longer to level up the character. But usually it is for good reason because some optional classes might have an advantage over the other classes.

Like I mentioned above, the game is very much like SWCL, but there are some special rules that are specific to the western theme. Now, this game does something that I love when it comes to the damage of guns: 1d6 ONLY! Now, the shotgun is 1d6+2 but it is still a single die being rolled. I love this about this game. Now, this game doesn't have armor, well except for a shield, which means there is a much higher chance of getting hit. Which is perfect for this game. The only thing I feel is missing from the combat rules are special rules when it comes to things like cover since there is no armor. For example: Receiving an AC bonus while riding a horse against an NPC who is not mounted on a horse. I mention that one as an example because in some Westerns you see the Cowboy hang from the side of his horse, using his horse as a shield, while shooting at the villains.

Included in the game are 16 Critters and Folks (The "monsters" of the system). Bandits, Outlaws, Wolves, Snakes, etc. But there is also nothing stopping you from using Zombies from SWCL.

Another great thing about Six-Shooters & Wagons (and other products from Justin Isaac) is the art! All of the artwork is Public Domain but he does a fantastic job with finding and selecting the perfect art. It has this wonderful Pulp Western feel to it. I love it!

What I would like to see in future supplements for Six-Shooters & Wagons is information about professions and town-building. A lot of Western shows and movies typically revolve around the entire town rather than all the gunslinger deputies. I feel with this information it lets the players create characters that are not only important to the session but also to the town-building aspect of the game. You could have a party where only one PC is actually a sheriff/deputy of a town while the other PCs are shop owners, or the native that works for one of the NPCs on the ranch, or the preacher of the town or whatever. Westerns aren't really about exploring the world and looking for treasure. It is about trying to make a living and surviving in a town/community. And often the adventures/dangers come to the PCs rather than them looking for it.

As I was reading through this I thought about how cool it would be to use miniatures and terrain for this game. Though, the miniatures can be something so basic and cheap as the packs of the Cowboys & Indians green army men style toys. While Lincoln Logs could be used to create sections of the town.

If you're already a fan of Swords & Wizardry Continual Light or you're just looking for a Western themed game then I would highly recommend Six-Shooters & Wagons. It is rules light and basic enough to expand and modify to make it fit for you and your gaming group. Also, did I mention that it is Pay-What-You-Want? So what are you waiting for? I'm sure you already clicked on the hyperlink before reading this review anyways. So go ahead and purchase it and throw in A Fistful of Dollars while you're at it to support Justin Isaac.
at March 08, 2018