Tanlentin is a world I've had in my head for about 15 years or so. There have been various notebooks full of ideas and random thoughts for this world. Sadly, 99% of these notes have been long gone for years now. Some of it, a small amount of it, is still flying around in my imagination somewhere. The original concept for Tanlentin was a setting for a Young Adult fantasy book series. The early concept was supposed to be a story about a coastal village of humans who did not know what was beyond the forest that surrounded them and what was beyond the sea ahead of them. This side of Tanlentin may still be explored in the future but for now, since this will be used as a setting for Swords & Wizardry Continual Light, we will explore the Lake Soerc Region.

Lake Soerc Region (Click for large map)
*In a later post I will describe in detail the locations of the region.*

The known player races in the region are Humans, Dwarves, Elves, Halflings and Constructs.
Humans - Live in Run'Hule, the capital of the region, and Rador.
Dwarves - The Dwarves of Tanlentin are not mountain dwellers but rather they live out in the sea in the large ships they create. They are sailors, fishermen, shipwrights and some of them are pirates. The ships that they create are true works of art. Some of their ships are as large as villages. The Dwarves can be found near the docks of Run'Hule and Rador. They can also be found on their ships in Lake Soerc.
Elves - The Elves of Tanlentin do not live in the forests but rather they live on the peaks of mountain tops. They are the guardians of the realm. They spend their lives dedicated to keep the evil that dwells within the mountains contained within the mountains. They are trained in combat and magic. They use enchantments and rituals to keep the evil contained. Though, they aren't perfect so some evil does manage to escape. The Elves can be found scattered throughout the tops of Irb Mountains. There are some that patrol the lands between Run'Hule and Vuhlkunder.
Halflings - The Halflings of Tanlentin were once human before the War of Jufohr. During the war, Jufohr, an evil entity from the depths of Tanlentin, cursed the humans of the region far south of Lake Soerc Region. The humans were cursed that their future children would be small, weak and frail and that they wouldn't be able to reproduce with other humans of Tanlentin. Eventually, their human-sized kin died off. The Halflings had to learn how to adapt and survive in Tanlentin. Not being as strong as the other humans they began training their mind. Over the course of many years they have become highly skilled engineers. Creating things such as guns, steam engines, constructs and other devices. The Halflings can be found in Run'Hule and Rador. They try to avoid traveling by water so they would rather travel around Lake Soerc than take a boat.
Constructs - The Constructs are the creations of Halflings. They are created for a purpose and each construct has it's own purpose. They are often created to be personal guards, labor workers, servants and merchants. The Elves do not trust these spiritless creations and they do not allow them into their villages and towns. The Dwarves take advantage of these creations and will allow them on their ships or use them on docks for loading and unloading goods and equipment. And the Humans, like Halflings, use these creations for all sorts of purposes. The Constructs can be found throughout the Lake Soerc Region.

In the coming posts I will discuss how the classes and races in Swords & Wizardry Continual Light work in Tanlentin. The in-depth descriptions of the locations in the region including plot hooks and lore. 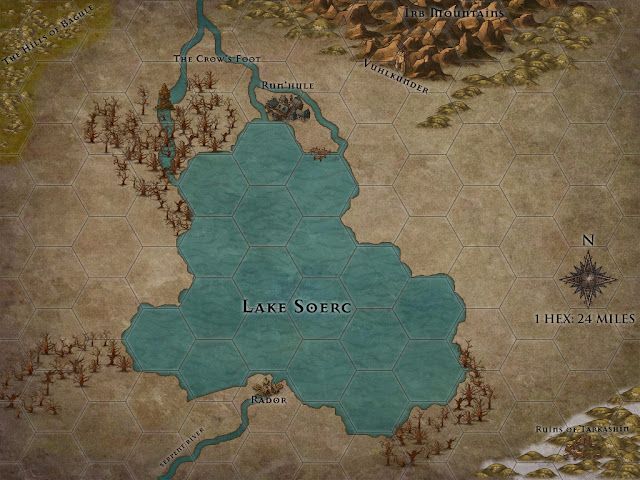