My Daughter the Dungeon Master

Today my daughter (10 years old) started her Swords & Wizardry Light Campaign. Yesterday I showed her that she could make her own maps on her Chromebook using Inkarnate. And the map she made is where the campaign is currently taking place. She called her location, Dragon Island, and she placed it in the ocean of the Gulf of Akados Region which is the map that is on the back of the SWL Legion folder. 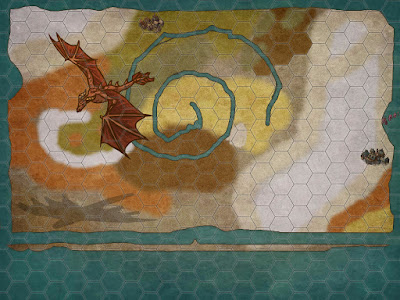 For the game I created a dwarf fighter, elf thief, human cleric and human magic-user all starting at level two. The game started out with us landing on the island about few days from Fire Town (northern town on the map). We were making our way to Fire Town to just visit but on the way there we encountered some zombies that we had to fight off. We didn't bother to examine the bodies because it was in the middle of the night and we wanted to hurry and get away from that area.
What my daughter did was determine how many days it would take for us to get to the town and she rolled to check for a random encounter twice a day (during the day and during night when we would make camp). When we finally made it to the town we asked around about the zombies we encountered and apparently the town was aware of the problem. When we asked more about it we discovered that the zombies have always been on this island before the races of the realm made this island their home. We were also told that Dragon Island is home to numerous dragons and most of which are neutral and have allowed the races of the realm to make their home on the island. During the night while we were in the Inn the alarm bell rang and we went outside and saw that the zombies were attacking the town. After we helped some villagers take down a few zombies we looked around and noticed the villagers were well equipped and were skilled enough to handle the zombie attacks on their own. The dwarf made some friends with two of the villagers who landed some brutal hits taking down some of the zombies.
The next day there was a town meeting about the latest zombie attack and the governor of the town asked for volunteers to seek out the Fire Dragon of the island and ask her for help/information on these zombies. We volunteered and so did the two villagers (John and Alice) that the dwarf became friends with. They gave us supplies including healing potions, horses and a wagon. They told us it would be best to visit the town to the east and seek out the Water Dragon and see if he could help us on where we could find the Fire Dragon. The trip took about two weeks or so to make it to the town. On the way we encountered more zombies, some hobgoblins and a snowy giant spider. The dwarf was very proud of his kill of the giant spider. He didn't even step off the wagon and he shot two arrows in the giant spider's head bringing it down with ease. The magic-user jumped out of the wagon and extracted some of the webbing into a vial.
When they made it to the town we talked to some people and they told us where to find the Water Dragon and we were told that he was very friendly and likes to go by the nickname, Clammy. When we met up with Clammy he was very eager to help us but he asked us to look for a crystal that was taken from him. He told us of a human who lives in the town that might know where this crystal could be. The human is the owner of the library in the town. She used to visit Clammy all the time but as she got older the trip got more dangerous for her to go out on her own. After speaking with her and finding out that one of the villagers found it when they were a kid we were easily able to acquire the crystal and give it back to Clammy.
After we gave the crystal back to Clammy he told us where we could find the Fire Dragon. He told us where her cave might be found and the area where she flies keeping an eye on the land protecting it from evil forces. But Clammy offered to give us a ride to the southern part of the coast. We accepted the offer and Clammy was also able to pick up the two horses and wagon in a separate trip. Before we made our way to find the Fire Dragon (which we forgot to ask what her name was) Clammy gave us a magical oyster. The magical oyster could only be used once but if we opened the oyster we would summon the aide of a minor Water Dragon. Then we were on our way to find this Fire Dragon. On the first night we encountered more zombies and after taking them down the cleric decided to examine the dead bodies. And that is when we discovered that one of the zombies looked like it once was human but the others looked more monstrous and ancient. Something that wasn't created from the dead....

And that is when we ended the game for the day.
Now, what my daughter did was map out how many days it would take us to get to this cave and prerolled twice a day for random encounters so she would already have it written down and know that day 3 this happens, day 7 this happens. And then she had me roll a d6 once a day to see if I could see the Fire Dragon in the sky. So far nothing.

My daughter made this entire game up as we were playing. She knew the mechanics of the game and so there really wasn't many questions. But she was harsh on some of the missed attack rolls. If I missed by just a couple it was fine. But if I missed by like 5 or more she would count that as a fumble even if I didn't roll a 1. On natural 20s her monsters would deal max damage but if I got a natural 20 she would let me choose to do max damage or roll 2d6. There were times I wish I would have just gone with max damage.

Overall it was a fun game and I can't wait until we play next time. I am curious as to what these zombies are..... 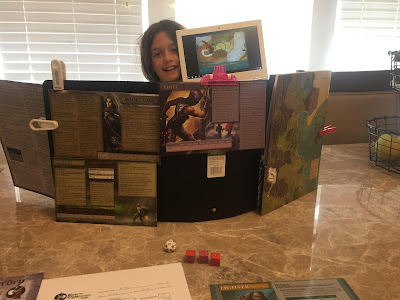 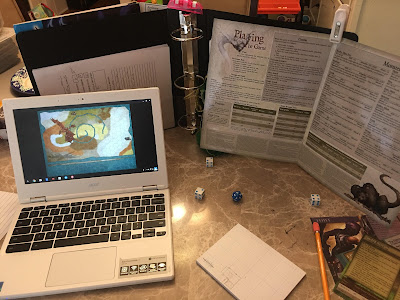