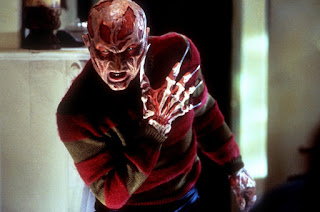 Freddy Krueger
Armor Class: 0 [19]/6 [13] (Outside of dreams)
Hit Dice: 9+1
Attacks: Claws (1d6+1) or Supernatural Terror (2d6)
Special: See below
Move: Fast/Standard (Outside of dreams)
HDE: 12
Freddy the dream stalker attacks his victims while they are sleeping in their dreams. When an adventurer is asleep, naturally or sleep spell, there is a 1 in 6 chance in 1d6 that Freddy will appear in their dreams. While Freddy is in their dreams the victim has a difficult time waking up. They must make a successful Saving Throw with a -5 penalty to wake up even when someone is trying to wake them. Any damage the adventurer takes within the dreams actually happens to them in the real world. If the adventurer wakes up while holding onto Freddy there is a 1 in 6 chance in 1d6 that Freddy will appear in the real world. Freddy can only be damaged by magic or magical weapons of +1 or greater in the real world. Supernatural Terror attacks can only happen within dreams.
at October 24, 2018